Wave turbulence is a statistical state that aims at describing the nonlinear random ensemble of waves as commonly observed at the surface of the ocean. A theoretical framework called "Weak Turbulence" exists since the 1960's to describe the weakly non linear case. Whether the Weak Turbulence Theory can describe a real system is still the object of investigation.

Here we will rather study a solid system supporting elastic waves: the vibrating elastic plate or actually a gong ! The rich and peculiar sound of a gong is due to the nonlinear transfer of energy from the modes excited usually at rather low frequency to high frequency ones: the famous cascade of energy of turbulence !

In this lab course we will introduce a profilometry method based on high speed imaging that allows us to record the vibrations of the gong  with both space and time resolution and thus study in depth the properties of the sound of the gong.

This lab-course is well suited to M1 and M2 students having a background in continuum mechanics (solid mechanics or fluid mechanics) with very basic knowledge in statistical Fourier analysis.

Module 1: Experimental investigations of the statistical properties of a vibrating plate 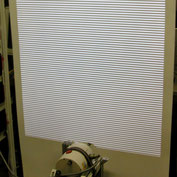 We will use a 2mx1m stainless steel plate, 0.5 mm thick that is set into vibration by an electromagnetic shaker.

A pattern is projected on the plate and visualized by a high speed camera. A simple algorithm will be used to invert the deformation of the recorded pattern in order to measure the displacement of the plate. In this way we will obtain a measurement that is resolved in 2D space and time. By using a space-time Fourier analysis we will investigate the statistical properties of the observed wave turbulence and notably check the persistence of the waves.

In this way we will obtain a measurement that is resolved in 2D space and time. By using a space-time Fourier analysis we will investigate the statistical properties of the observed wave turbulence and notably check the persistence of the waves.

Going further in the observations thanks to simulation 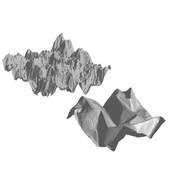 The second part of the course will be devoted to numerical simulations of the vibrating plate in ideal conditions such as periodic boundary conditions.

In this way we will be able to observe the transitory behavior of wave turbulence, the impact of dissipation or the change of morphology observed at strong forcing.